The sixth hole of the Great Chebeague Golf Club’s course, a 110-yard par 3, is ranked the easiest of its nine holes. That is, unless you fail to admire its sweeping views of Casco Bay.

Those who disregard the picturesque harbor below, the parade of sail and motor boats in the bay, and the beach roses clinging to the shore, may be levied a two-stroke penalty, by island custom.

Maine’s island golf courses have many such quirks. Three of these distinctive nine-hole courses are reachable only by ferry: The Tarratine Club of Dark Harbor course on Islesboro is renowned for its challenging, grass-covered mounds and sweet Penobscot Bay breezes. The North Haven Golf Club course wraps around a historic family cemetery and includes a ball-swallowing tidal inlet. And Great Chebeague’s course features water views from every green and several tees that shoot over a town road.

All have signature tournaments: Chebeague has its Swatfests, North Haven boasts a notorious G&T Invitational, and the rogue Islesboro Open matches plumber against patrician for a day of equal play.

Their fairways can demark class—or invite surprising social connections. And all offer a hell of a good round of golf.

The oldest of the trio is the Tarratine Club of Dark Harbor on Islesboro, a natural, hilly course that is part of a private yachting-tennis-golf club founded in 1896 (the golf course later moved to its present spot).

It’s a decidedly private course, with two pros on staff and elegant, white-linen dining in the historic clubhouse, so unless you know a member, don’t expect to play a round. The course is known for its natural, hilly mounds and several holes of shoreline play that give it a true links feel. The fairway of the first tee offers stupendous, sunset views of Gilkey Harbor and the Camden Hills beyond. 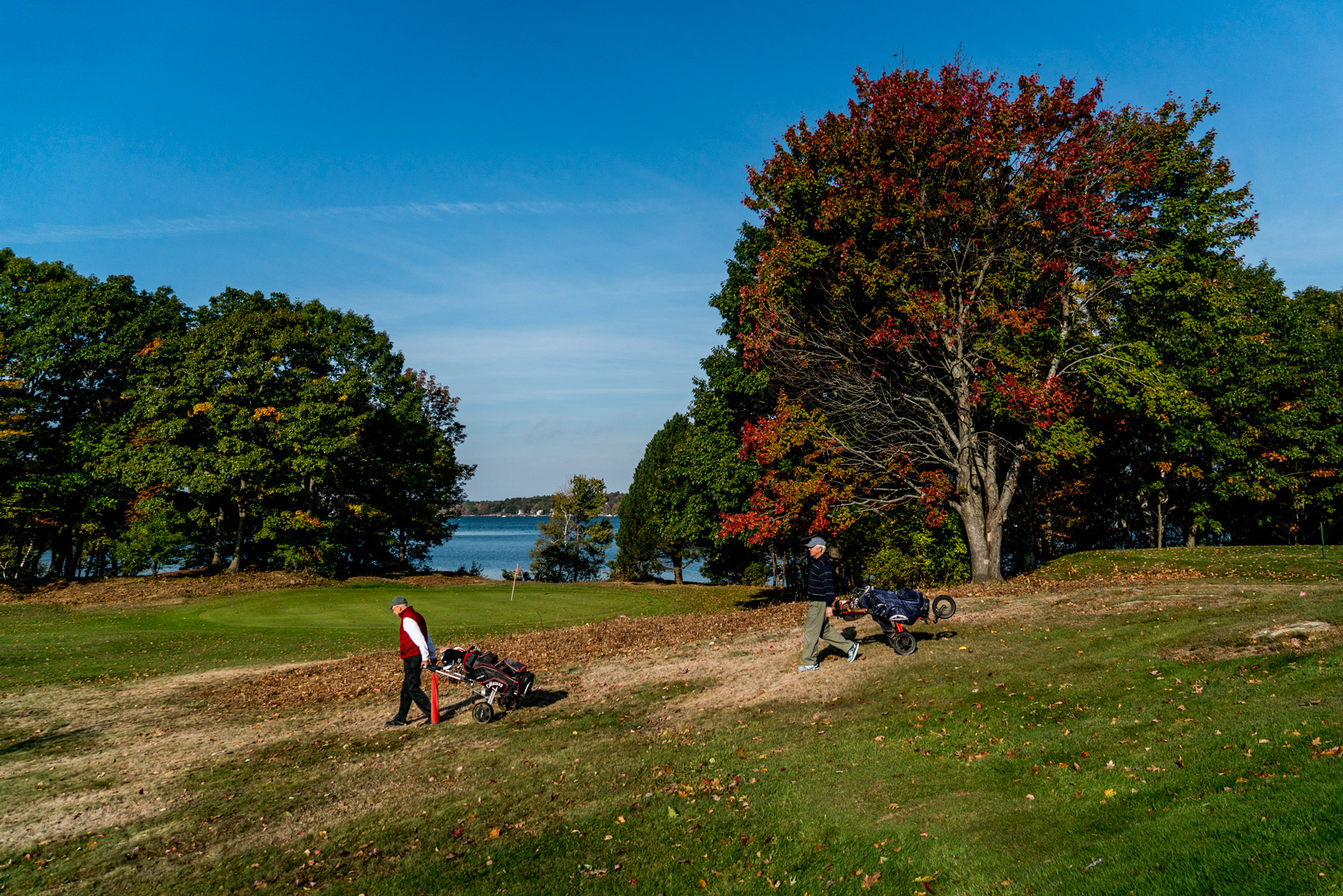 The Tarratine is a challenging course, with holes that invite you to draw the ball, several forced carries and two par 5s. Its signature hole is the seventh, reputed to be one of the hardest par 3s in the state, at 220 yards uphill to an elevated green.

“It’s a lovely, seaside links course and I wouldn’t compare it to any parkland, sculpted course,” says longtime member Tom Gillespie, chairman of Tarratine’s golf committee. “There are many little bumps and valleys. I think it makes it more challenging—a player has to use more imagination in planning for his next shot.”

It would be easy to categorize Tarratine’s exclusivity as a holdover of the summer wealth that once sharply divided Islesboro, but the truth is always more nuanced. The club has an active golf program for kids at the island school and “is also open to island participation under certain circumstances,” says Gillespie.

Those circumstances were masterminded, in part, by Tom Tutor, a now-retired island mathematics teacher who helped to pull off what one Dark Harbor doyenne reportedly called “the diplomatic coup of the century” when he and a Tarratine member organized the first Islesboro Open one fall in the early 1980s.

The unsanctioned tournament comingled summer and local players, an unprecedented contest that has evolved into twice-yearly scrambles that raise funds for local programs.

“We didn’t have any authority to do it whatsoever,” recalls Tutor. “We just publicly advertised that we were going to have a tournament. The fact that we could have an athletic competition that involved both year-round residents and some intrepid summer residents transcended some of the classic class lines and everyone enjoyed it.”

Subsequently, the club began offering a limited island membership for around $250 a season, with golfing rights after 4 p.m. and before noon on weekends. “Instead of sneaking onto the course,” Tutor says, laughing, “now we can pony up our annual fee, and if we stay invisible, we can play the course.”

The issue of greens access and enjoyment isn’t unique to Islesboro. Each of the golf courses bears witness to shifting island land ownership, from summering Native Americans to early American settlers to legions of well-heeled “rusticators” in the late 19th century who flocked to islands to build their summer cottages.

The original plans for the Great Chebeague Golf Club course, which opened for play in 1921, indicated a settlement of teepees at what are now the first and second fairways. The island had been a summering spot for Passamaquoddy and Presumpscot Indians for centuries and still hosted them when the course opened.

At first golfers played around the “Indian camp,” as it was called, but they were later moved to a wooded parcel at the course’s edge. They continued to return there, selling sweetgrass baskets to visitors, until petering out in the 1950s.

This unusual bit of golf course history is part of what earned the club its 2015 certification on the National Register of Historic Places. Another is its quaint clubhouse, a farmhouse dating to the early 1800 that was moved to its present location not far from the Chebeague Island Inn, an independent property adjacent to the course where visiting golfers often repair after a round or two.

Chebeague’s is the only Maine island course on the registry and inspires “fanatic devotion” among its roughly 120 members, according Linda Grant, the club’s archivist.

“Playing golf at Chebeague is not like playing anywhere else that we know,” she says. “We walk, and if we see a friend, we stop and talk with them. We will divert from the fourth green to the fifth tee to pick blueberries by the fence. We even stop and talk to people who come to play from off-island.”

The course is semi-private with daily greens fees ranging from $30 to $45. Remarkably, any island resident can play for free after 5 p.m. The club also has tried outreach to the island’s lobstermen over the years. “There are, I’m sure, year-round residents who feel like the club is exclusive,” acknowledges club president Carl Tubbesing, “but from the club’s standpoint we really try hard to be inclusive. We’re up against the fact of their lives, making a living mostly.”

The Chebeague course is the shortest of the island courses. Measuring 4,478 yards for 18 holes of white-tee play for men, it is deceptively challenging, with a rating of 62.2/102 for men and 65.4/109 for women. It requires golfers to play over ravines and roads, tee off on a working ferry dock, and hit a 140-yard water hole over a cove ringed with tall trees.

“It looks like a relatively easy course, but in fact, our course record is only six strokes under par and you can go wrong lots of ways,” says Tubbesing. It has three par 3s in a row and six par 4s with the signature seventh hole teeing from an Astroturf mat at the ferry landing on the Stone Pier.

The club is probably best known for its Swatfests―begun in the 1930s―a long-cherished tradition that brings out the whole island for rounds of sequential tee-offs leading to sudden death.

“Last year the youngest member was 6 years old and the oldest was 97,” remarked Grant, adding with a laugh: “Everyone is fearful of hitting the first ball because the whole island is watching you tee off.”

The 35-par North Haven Golf Club course has the wide-open, familial feel of what it formerly was—a cow pasture. Built on land that was once part of the Waterman farm, the hillside course overlooks the Fox Island Thoroughfare and includes the old Waterman family cemetery. (Balls landing on sacred ground get a free lift.)

Founded in 1916, the course has the distinction of having been designed by renowned links architect Wayne Stiles (1884-1953) of the firm Stiles and VanKleek. Its good bones and evolving course improvements have made it widely popular—and have even inspired other island clubs to spruce up course definition. 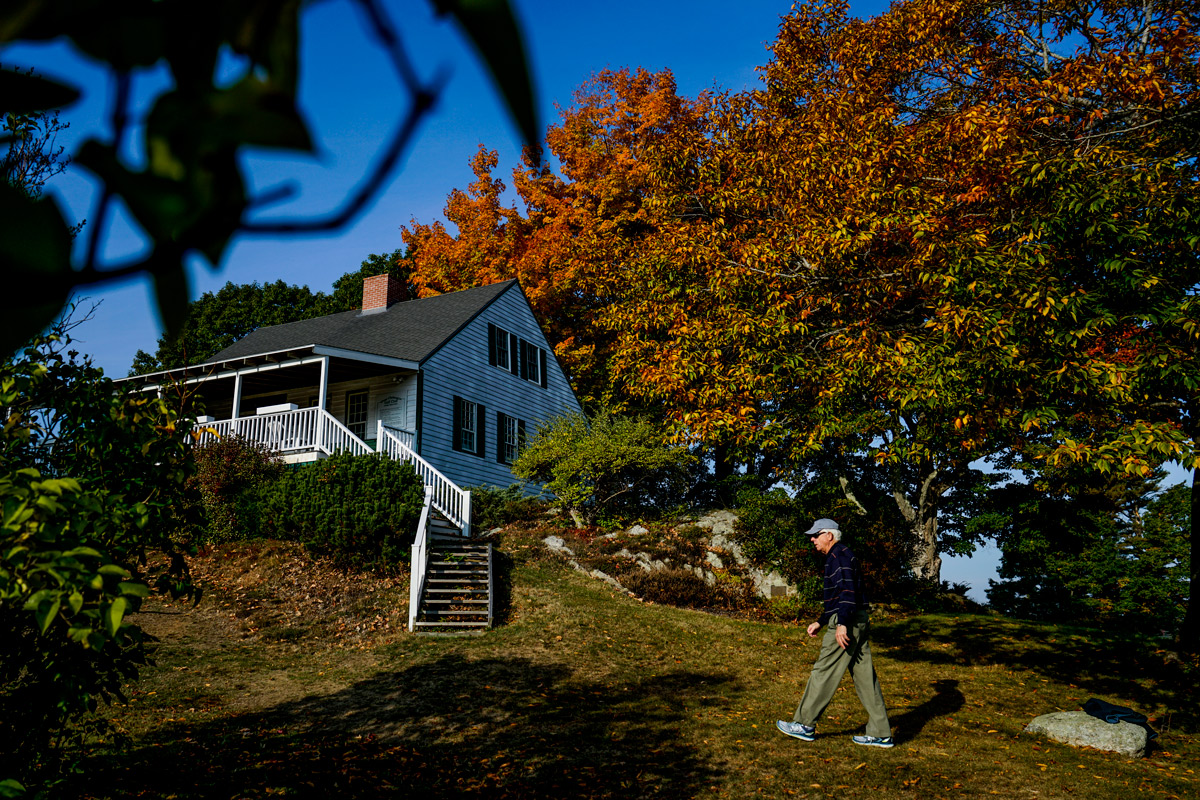 Officially, it is a private course, but daily public memberships are available for around $70. It’s a challenging course: There are six par 4s, a 598-yard, dog-leg par 5 at the fifth, and a monster of a par 3 at the sixth hole that plays over a tidal inlet to a green ringed with mounds.

It’s a relatively rangy course—6,246 yards from the tips for men’s gold-tee play for 18 holes (rating is 70.4/122 for men and 67.2/114 for women). The club has made a concerted effort to improve play on the greens, which, like many old courses had become thatchy and spongy over time. It now plugs the greens during spring and fall, and around 15 years ago, brought in an expert golf course architect to provide ideas for improvement.

“(The architect) said nothing is wrong with the course, it’s just a little too easy,” said Jamie Davidson, a year-round North Haven real estate agent and clerk of the course.

The architect’s recommendation was to leave the grass between the fairways uncut.

As a result, at the edge of the fairway, golfers encounter a very tall rough of tough grasses, which get taller as the season progresses. “If you can find your ball, well, I’m not strong enough to hit it out,” says Davidson.

North Haven’s standout tournament is the so-called G&T, or gin and tonic, an invitational begun in the ‘70s by a group of Colby College alumni, one who was then teaching on North Haven. He invited his buds over for some lubricated rounds, which evolved into an annual tournie accompanied by a tractor-trailer loaded with gin and Bloody Marys.

“It’s calmed down a bit now that the members are in their 70s,” chuckles Davidson, adding: “What I love about it is that in the spring or the fall you can go up in the afternoon after work to play golf and will often-times have the whole course to yourself. There are these long views—you can see Goose Rocks Lighthouse through a couple of fairways. It’s very relaxing.”

Whether access is sanctioned or not, Maine’s island golf courses offer natural respite that can be hard won during the work-filled or visitor-strewn months of summer. Ultimately, they are year-round public spaces where islanders walk dogs, push their children down sledding hills, and (I can say with some authority) meet sweethearts for moonlit trysts. The sea is never far, the stars are always wide—and a birdie is always on the horizon.

Well-worth a mention—though not technically an island course by virtue of bridge access—is the Island Country Club on Deer Isle. A par-34 semi-private course, it also was designed by Wayne Stiles. It’s a relatively short course at 2,400 yards in length, but a substantial redesign in 2011 makes good use of its varied terrain of hillside, marsh, and woods.

Noted golf writer Stephen Goodwin described the course as one that “tests the full range of a golfer’s skills … Risk and reward must be weighed on almost every shot, and the small, lively greens demand precision with the wedge and the putter,” he wrote about the course.

The course is a true community affair, with half of its membership deriving from the year-round population. The Fairway Café in its remodeled clubhouse is a popular meeting spot and its greens are kept up to par for a full three seasons. (The signage for winter rules even notes: “Do NOT pull frozen pins out of the cups―it volcanoes the holes.”)

Selby Frame is a Portland-based writer who summers on Islesboro.